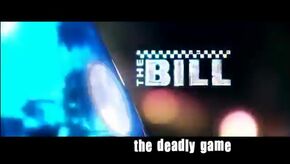 The Deadly Game, episode 570 or S24E01, was the 2219th epidode of The Bill and the first of the year 2008. This was the First appearance of DC Stevie Moss. It was directed by Paul Wroblewski and originaly aired on January 2nd 2008.

This episode was the first appearence of DC Stevie Moss, having been transfered from SO 10.

PC Gayle and PC Fletcher arrest a young girl. Lilly Davis aged 14 was the pasanger of a joy rider "Darren". He managed to get away after runing from the car, avoiding the officers and returning to drive away under thier noses.

DCs Stevie Moss, Micky Webb and Terry Perkins attend an assault at a car park. The victim; 28 year old, IC1 male, Robert Nash. It apeared that he had been run down and the car had been spotted on CCTV speeding from the scene. The car was owned by underwear model and rising football star Jem Archer, who reported his car missing the morning after the insodent. As it turned out this was the same car Lilly Davis was driving.

Lilly had found the car abandoned on a side street with the door unlocked. She hotwired the car, drove it home and took Jem's mobile phone that he had left on the floor. She had aranged with Jem to sell him the phone back for £500.

Jem and his fiancée Michelle Rosen had been clubing had been clubing and had a massive argument involving Robert Nash. Nash and Jem had been dating off and on for two years in secret, and Michelle had agreed to be Jem's "cover". Ernie Rosen - Michelle's father and Jem's agent - had previously convinced Jem he couldn't be openly gay and a prosional footballer when Jem had said he wanted to be open about his and Nash's relationship.

That night Jem and Robert met outside the club and we ment to be spending the evening together but Michelle had demanded he stay with her. Nash had given Jem an ultimatum, either him or Michelle. Jem returned to the club to tell Michelle it was all off and that caused the argument. Jem and Nash left seperatly, as they always did to avoid unwanted attention, Nash left first. By the time Jem got back to his car park his car was gone and he couldn't find Nash and assumed they were meeting back at Nash's flat.

At the same time Ernie Rosen met Michelle at the club after a tearful phone call. He claimed in interview that Michelle had taken his car home and he had waited for Jem. He said he wanted to warn Nash off, he couldn't bare to see his celebraty obsessed daugter in such a state. Fortunatly when Stevie and DS Max Carter returned to Jem's flat Jem and Michelle were having a heated argument and Michelle admits running over Nash.

Retrieved from "https://thebill.fandom.com/wiki/Episode:The_Deadly_Game?oldid=34502"
Community content is available under CC-BY-SA unless otherwise noted.