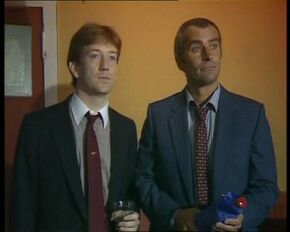 The Chief Super's Party is the 23rd episode of The Bill.

P.C. Muswell and P.C. Lyttleton are on the lookout for a lorry full of stolen sheepskin coats.

Ch. Supt. Brownlow is throwing a farewell party for his retiring clerk. D.I. Roy Galloway questions D.S. Burnside when he gatecrashes the party, and Burnside admits that he fancies W.P.C. June Ackland. D.C. Mike Dashwood realises that the scotch being poured at the bar is stolen, and Galloway asks Ackland to keep the remaining bottles aside as evidence.

Despite warnings from the D.I. and the Chief Super, D.S. Ted Roach drives home extremely drunk and crashes his car through a fence into a garden. Knowing he'll be sacked if he's found out, Roach sleeps on a friend's boat overnight while he sobers up, but spots the coat thieves on the docks when he awakens, and the men are arrested when they are found stuck in a cold storage warehouse. Roach also sweet-talks the man whose garden he crashed into by offering to get him into the Special Constabulary. P.C. Reg Hollis grasses on Roach to Brownlow, in the hope of getting the clerk's job. Desperate to save his sergeant's career, Galloway gets Dashwood to trace the stolen scotch to Mr. Brownlow's golf club, and manages to get Roach off the hook.

Retrieved from "https://thebill.fandom.com/wiki/Episode:The_Chief_Super%27s_Party?oldid=33277"
Community content is available under CC-BY-SA unless otherwise noted.