Start a Wiki
The Chain of Command 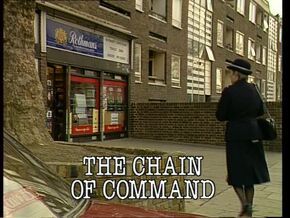 Written By
Christopher Short
Directed By
Robert Tronson
Episode Chronology:
Previous
The Mugging and The Gypsies
Next
Life and Death

The Chain of Command is the 88th episode of The Bill.

Ch. Insp. Conway is late for a meeting with a Mr. Trevelyan from the Department of Trade and Industry, who wants police help in shutting down Radio Sun Hill, a pirate radio station. Conway orders the winos who blocked his car taken off the streets, but when one of them tries to escape from his cell, Sgt. Cryer recognises him as an old friend from his army days, who turns out to be undercover. P.C. Smith asks W.P.C. Martella to talk to a lady who has been beaten up by her boyfriend. She changes her mind about pressing charges as she doesn't want her husband to know. She then explains the injuries by saying the police beat her up, and her husband turns up and attacks Smith. Despite D.S. Roach's objections that it's a waste of police time, he, Carver, Dashwood and Edwards raid Radio Sun Hill, but they escape.

Brian Bovell, who plays the voice of Radio Sun Hill, would later join the cast as D.C. Rob Thatcher. Bovell is barely visible in this episode, but his voice can be heard on Haynes's radio.

Retrieved from "https://thebill.fandom.com/wiki/Episode:The_Chain_of_Command?oldid=34526"
Community content is available under CC-BY-SA unless otherwise noted.