Start a Wiki
The Assassins 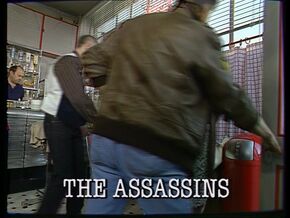 Burnside and Tosh are in a cafe waiting to catch a group of people who take apart restaurants. They turn out to be upper class twits. One of them winds the magistrate up so much he is sentenced to 28 days in jail and the diplomat father of another waives his immunity. Yorkie and Haynes investigate a removal van. The elderly driver doesn't think the company is to be trusted and he is proven right after visiting the station three times. Tosh's wife turns up looking for housekeeping money from him, and she mentions it is their 15th wedding anniversary.

Retrieved from "https://thebill.fandom.com/wiki/Episode:The_Assassins?oldid=34311"
Community content is available under CC-BY-SA unless otherwise noted.