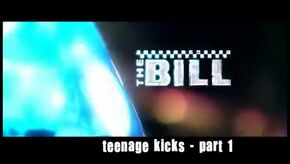 PCs Mel Ryder (Rhea Bailey) and Millie Brown (Clare Foster) are called to Graham Ransome’s (Kevin Pallister) house, who has reported his seventeen-year-old son, Alistair, missing. Graham claims his absence is uncharacteristic and that Alistair isn’t an average teenager, but a highly gifted athlete. He tells the officers that the last place Alistair was seen was a house party that PCs Sally Armstrong (Ali Bastian) and Tony Stamp (Graham Cole) have made their way to, after receiving complaints from neighbours.

Arriving at the party, Tony is greeted by arrogant Simon Thorn (Daniel West) and his girlfriend Katie Fielding (Jennie Jacques) while Sally runs upstairs and finds Stephanie Weeks (Nikita Mitchell), unconscious after taking drugs. Once Stephanie is loaded onto an ambulance, Tony and Sally question Simon and Katie who tells them that Alistair was at the party but left hours ago. They also claim that the drugs were brought in by gatecrashers, leading Tony and Sally to worry that Alistair may have taken the same drugs. Shortly after, the discovery of an injured teenage male in a park is reported and Mel and Millie instantly respond. They run to the scene where they find Alistair, but the officers are too late.

Later, Mel and Millie are told that Alistair died from severe head injuries and are tasked with telling a disbelieving Graham who continues to deny that his son would have anything to do with drugs or anything untoward. Simon is brought in for questioning and says that a schoolmate, Michael Fleming (Stefan Davis), gate crashed the party and brought drugs with him – when Alistair asked him to leave, he got angry and the two fought.

Michael is interviewed and tells DC Mickey Webb (Chris Simmons) that Simon is lying about the drugs and swears he had nothing to do with Alistair’s death. Things start to look worse for Michael when his alibi breaks down and officers discover that the two were athletic rivals. However, as the case develops and more evidence comes to light, officers realise that Alistair’s murderers are Simon and Katie – but they don’t have a single piece of concrete evidence to prove it.

Retrieved from "https://thebill.fandom.com/wiki/Episode:Teenage_Kicks_-_Part_1?oldid=34059"
Community content is available under CC-BY-SA unless otherwise noted.