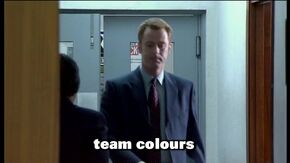 A post-match fight is being arranged between two rival gangs of football fans, and Sun Hill is the venue. When Supt Chandler assigns DI Cullen to the case, DCI Meadows is determined to show him up by cracking the case himself using a teenage assault suspect and member of the Larkmead Crew as an informant. When Cullen and Lennox discover Meadows' informant has lied to him about the gang's intentions, CID and Uniform rush to head off the mob before they attack an Asian marketplace.

Retrieved from "https://thebill.fandom.com/wiki/Episode:Team_Colours?oldid=35267"
Community content is available under CC-BY-SA unless otherwise noted.