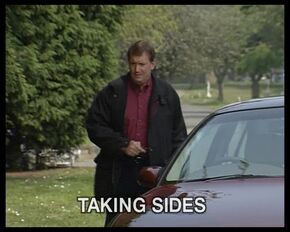 Taking Sides is the 1362nd episode of The Bill.

P.C. Stamp attends the funeral of Simon Attwell, the pedestrian he knocked down while reversing the area car, but his presence is not welcomed by the family.

Stamp is also horrified to discover that P.C. Quinnan has been called as a witness against him in his trial for causing death by dangerous driving. Out together in the van, Stamp and Quinnan stop a Rolls-Royce carrying a bride to her wedding. When they discover the car is a ringer, they end up taking her to the church in the van.

At a local pub, The Bear's Head, there are reports of underage drinking. W.P.C. Hagen and P.C. McCann pay a visit, finding many teenagers and arresting one for assaulting Vicky. Later, another call comes in, reporting a disturbance at The Bears Head by the same youths. P.C. Ashton and W.P.C. Keane respond only to find them hiding in the toilets. When Ashton goes in to investigate, he ends up handcuffed to plumbing and the door is barricaded, and things get worse when the youths steal his CS spray.

Retrieved from "https://thebill.fandom.com/wiki/Episode:Taking_Sides?oldid=34570"
Community content is available under CC-BY-SA unless otherwise noted.