Start a Wiki
Taken Into Consideration 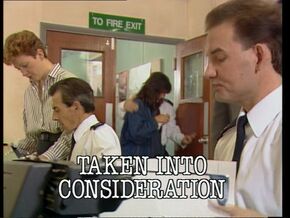 Written By
Lawrence Gray
Directed By
Christopher Hodson
Episode Chronology:
Previous
Digging Up The Past
Next
Getting It Right
Taken Into Consideration is the 83rd episode of The Bill.

D.C. Dashwood and D.C. Carver are on an obbo in a street where a spate of burglaries has taken place. They see a young man, Kevin Boswell, climbing over a wall with a bag full of 50p pieces, and they arrest him for theft. They also take Kevin's girlfriend, Daphne, into the station as there is what looks like stolen goods in her house. Dashwood is positive Boswell is their man, and W.P.C. Ackland makes a complaint against him when he applies too much pressure to Boswell during interview. Boswell is either really smart and devious or not too bright and living an elaborate fantasy about being a criminal. Dashwood and Carver return to Boswell's flat and find out which...

Retrieved from "https://thebill.fandom.com/wiki/Episode:Taken_Into_Consideration?oldid=34317"
Community content is available under CC-BY-SA unless otherwise noted.