Start a Wiki
Taken For A Ride 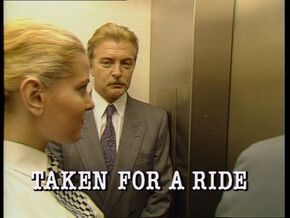 Written By
Barry Appleton
Directed By
Terry Marcel
Episode Chronology:
Previous
Black Spot
Next
Time Out
Taken for a Ride is the 146th episode of The Bill.

D.S. Roach is going before the Inspectors Promotion Board, but the members made up their mind before the interview that he wouldn't be promoted. D.C. Carver is moaning to D.I. Burnside about going out in the evening. They are doing an obbo on a lorry with P.C.s Able and Turnham inside. D.C. Dashwood loses the lorry and the radio link doesn't seem to be working. Burnside goes up in the police helicopter. Able is beginning to be affected by the fumes when they find themselves back where they started from. The driver was listening to the police communications all the time.

Retrieved from "https://thebill.fandom.com/wiki/Episode:Taken_For_A_Ride?oldid=34665"
Community content is available under CC-BY-SA unless otherwise noted.