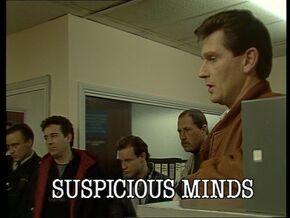 Suspicious Minds is the 106th episode of The Bill

Sun Hill C.I.D. and the Vice Squad raid six flats to catch a pornography ring. All the flats are clean except one, and it is suspected that the targets were tipped off. D.C. Dashwood saw D.I. Burnside making a phone call just before the raid, and shares his suspicions with D.S. Roach who wants nothing to do with it. Dashwood informs Ch. Insp. Conway, who calls Burnside in. Burnside insists he was calling his travel agent, and Conway checks up on it. P.C. Smith and W.P.C. Ackland pull over a car for dangerous driving, and the driver is one of the suspects in the raid. He helps Burnside catch the head man, Collins, who puts Sun Hill in the clear for the tip-off, but Burnside warns Roach he'll find out who grassed him up. Smith and Ackland stop a man from filling another man's skip with rubbish. When the dumper fails to collect his rubbish, the skip owner dumps it outside the station.

Kellie Bright guest stars as Daughter of Mr. Carmody in this episode.

Retrieved from "https://thebill.fandom.com/wiki/Episode:Suspicious_Minds?oldid=34587"
Community content is available under CC-BY-SA unless otherwise noted.