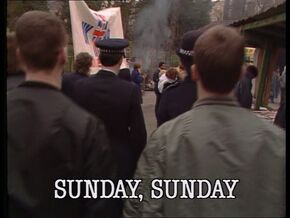 Sunday, Sunday is the 103rd episode of The Bill.

P.C. Edwards and W.P.C. Martella are patrolling the Sunday markets when a conflict breaks out between two group of white supremacists. Martella is punched to the ground and Edwards is kicked in the kidneys during the ensuing riot. Martella is then teamed up with P.C. Haynes and investigates a broken window. A black vicar talks to Insp. Frazer about racist threats to his parishioners. W.P.C. Ackland is sent to attend a woman's sudden death due to intestinal cancer, but her son insists that he killed her.

Retrieved from "https://thebill.fandom.com/wiki/Episode:Sunday,_Sunday?oldid=34581"
Community content is available under CC-BY-SA unless otherwise noted.