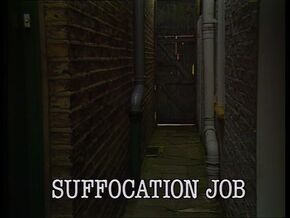 Written By
P. J. Hammond
Directed By
Brian Farnham
Episode Chronology:
Previous
Silver Lining
Next
Mickey Would Have Wanted It
Suffocation Job is the 121st episode of The Bill.

June calls on a lady who claims her husband wants to kill her but the threat is from four years earlier. A neighbour claims that the lady told her that her husband had smothered their baby with a pillow.

Melvin investigates a break-in of a building which has both outside doors wedged open and all the windows open....including a display window. The next day is called to another break-in with the same M.O. but the burglar is still inside, in a rather precarious position.

Retrieved from "https://thebill.fandom.com/wiki/Episode:Suffocation_Job?oldid=34617"
Community content is available under CC-BY-SA unless otherwise noted.