Start a Wiki
Street Games and Board Games 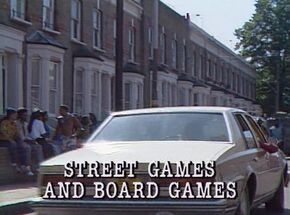 Written By
J.C Wilsher
Directed By
Barry Davis
Episode Chronology:
Previous
Leaving
Next
Pressure
Street Games and Board Games is the 149th episode of The Bill.

W.P.C. Ackland and P.C. Stamp walk through a black neighbourhood, and are called to a disturbance at a white household. The baby's father was arrested by D.S. Roach the night before in a raid on the house for selling intoxicating liquor. The baby's mother is Roach's snout. The officers find themselves in a near-riot. Chief Supt. Brownlow is at a role play for senior officers, about riots on the streets of London.

Retrieved from "https://thebill.fandom.com/wiki/Episode:Street_Games_and_Board_Games?oldid=34670"
Community content is available under CC-BY-SA unless otherwise noted.