Start a Wiki
Stop and Search 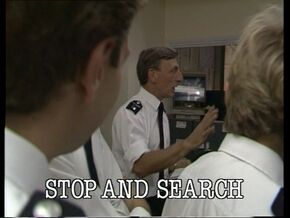 Sgt. Cryer introduces two special constables who will be joining the relief: Mary Kilnair and Brian Defoe. While on patrol with P.C. Edwards, Kilnair is pricked by a junkie's needle, there is grave concern she may have been infected. A man arrives at the station to confess to the murder of his wife - thirty years previously. D.C. Carver, and new D.C. Tosh Lines, investigate. A lawyer meets with the station top brass (Brownlow, Conway and Frazer) to discuss her client's claim of being stopped and searched thirteen times in two weeks. Lines recognises the M.O. from his last nick - several black men giving the same name and address whenever they are stopped by police. D.S. Roach asks Insp. Frazer out on a date, but Burnside finds out and makes fun of him.

Retrieved from "https://thebill.fandom.com/wiki/Episode:Stop_and_Search?oldid=34279"
Community content is available under CC-BY-SA unless otherwise noted.