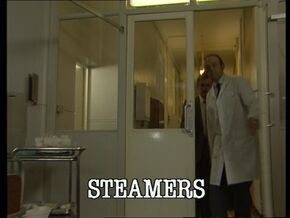 Steamers is the 91st episode of The Bill.

D.S. Roach goes to the hospital to talk to a young man who was slashed in the face with a knife - the fifth in a series of "steamer" attacks, where knife-wielding youths have held up restaurant patrons. D.C. Dashwood receives a tip-off about the steamers' next target, and the restuarant is filled with undercover police officers. P.C. Edwards is jealous that he and Carver didn't get a free meal paid for by the Met, and the steamers are caught when they raid the restuarant. P.C. Melvin investigates a strange smell from a flat used by junkies, and finds the body of an elderly man who suffered a heart attack. Melvin can't believe the old man was a junkie.

Steamers wave knives around to scare people into handing over credit cards and/or jewellery.

Retrieved from "https://thebill.fandom.com/wiki/Episode:Steamers?oldid=34532"
Community content is available under CC-BY-SA unless otherwise noted.