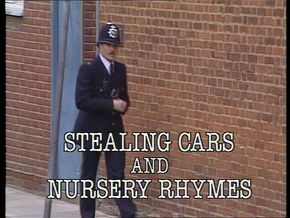 Yorkie has problems with kids at a youth group. He pusues a group of youths in a stolen car that ends in two deaths. Ramsey is befriended by a stray dog that runs loose in the station, and deals with a call about a U.F.O. sighting.

Tom Cotcher, in a cameo role here as the ubiquitous 'Dog Walker', would later join the cast as D.C. Alan Woods.

Retrieved from "https://thebill.fandom.com/wiki/Episode:Stealing_Cars_and_Nursery_Rhymes?oldid=34333"
Community content is available under CC-BY-SA unless otherwise noted.