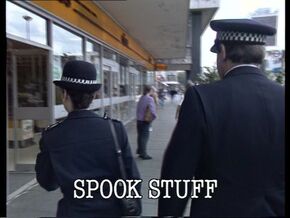 Written By
Geoff McQueen
Directed By
Terry Marcel
Episode Chronology:
Previous
Stop and Search
Next
Evacuation
Spook Stuff is the 66th episode of The Bill.

W.P.C. Martella and P.C. Stamp take an American woman who has been caught shoplifting into custody. She is very insistent that the police contact her husband who is staying in a hotel. The husband, meanwhile, is reporting the theft of his briefcase from their hotel room. D.I. Burnside is warned off the case by a Special Branch officer and a C.I.A. agent, who are waiting for the man to sell top-secret papers. D.S. Roach is having money troubles, but when one of his snouts offers to sell him the secret documents, Roach and Burnside use the situation to clear up Roach's debt problem. Roach is furious when Burnside double-crosses his snout and the papers are returned to the Americans.

Retrieved from "https://thebill.fandom.com/wiki/Episode:Spook_Stuff?oldid=34283"
Community content is available under CC-BY-SA unless otherwise noted.