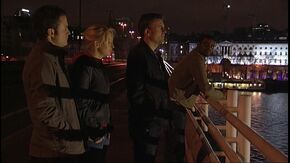 Written By
Tom Higgins
Directed By
Robert Del Maestro
Episode Chronology:
Previous
The Hit
Next
Deadly Cocktail
Spilt Blood is the 2238th episode of The Bill.

Sgt Stone and PC Armstrong investigate an assault on a young woman found in an alleyway outside a club. The officers suspect rape, but the victim insists that she was the victim of a mugging. A drugs raid planned by DS Carter and DCs Moss and Perkins is a bust as they were fed false intelligence.

Retrieved from "https://thebill.fandom.com/wiki/Episode:Spilt_Blood?oldid=34922"
Community content is available under CC-BY-SA unless otherwise noted.