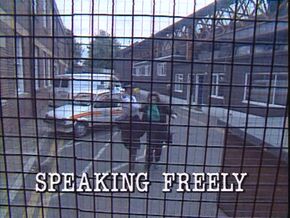 Written By
Gary Lyons
Directed By
David Attwood
Episode Chronology:
Previous
Woman In Brown
Next
The Return of the Prodigal Son

Speaking Freely is the 183rd episode of The Bill

Frazer brings in a suspected shoplifter. Frazer is having her appraisal interview later. A woman comes in to inform Frazer that there might be problems at a talk given by a pro-abortionist.

Retrieved from "https://thebill.fandom.com/wiki/Episode:Speaking_Freely?oldid=34742"
Community content is available under CC-BY-SA unless otherwise noted.