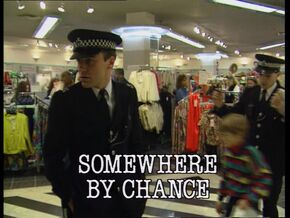 Somewhere By Chance is the 131st episode of The Bill.

P.C.s Ramsey and Edwards investigate stolen credit cards in shopping precinct. While there a soldier says he has a bomb. The precinct is cleared and the relief check for the bomb. Edwards catches one of a pair of looters and while looking for the other looter he finds a rocket launcher in the toilet. D.S. Roach and D.C. Dashwood find a stolen car two-and-a-half years after it was stolen. W.P.C. Brind goes to investigate a break-in but finds that everything has been cleaned and that lady who supposedly reported the incident is not there. Brind discovers the lady never existed and that the man she saw has form for indecent assault. She also finds out how close she was to becoming a serial killer's third victim.

Retrieved from "https://thebill.fandom.com/wiki/Episode:Somewhere_By_Chance?oldid=34637"
Community content is available under CC-BY-SA unless otherwise noted.