Start a Wiki
Somebody Special 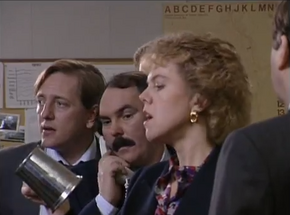 Reid receives the gift that Carver bought on behalf of CID

"Somebody Special" is the 409th episode of The Bill. It is the 13th episode of 1992. It was first broadcast in the United Kingdom on 13 February 1992 and features the final regular appearance of D.C.I Kim Reid.

D.S. Greig, about to take over as Acting D.I. tries to recruit a hardened female thief as a snout, but finds her more than a match for him. D.C.I. Reid is promoted out of Sun Hill to MS15. D.C. Carver is tasked with buying her leaving present, but his choice leaves a lot to be desired.

Retrieved from "https://thebill.fandom.com/wiki/Episode:Somebody_Special?oldid=33481"
Community content is available under CC-BY-SA unless otherwise noted.