Start a Wiki
Some You Win, Some You Lose 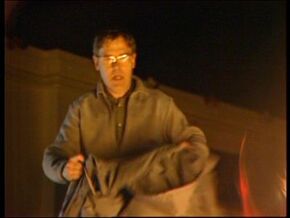 Some You Win, Some You Lose is the 25th episode of The Bill.

Ch. Supt. Brownlow and D.I. Galloway lead a massive raid on a drug den on a local council estate which escalates into a full-blown riot, but half a million pounds worth of crack cocaine is recovered. P.C. Melvin loses a handcuffed prisoner in the confusion, but he is arrested by P.C. Hollis when he turns up at the station asking for his handcuffs to be removed. The operation is down to D.C. Dashwood, whose snout is feeding them information on the main drug dealer. Meeting with the snout to get the location of the main drug lab, Dashwood is alarmed when P.C. Carver recognises his informant as another dealer named Duggie Gardiner. C.I.D. raid the location given to Dashwood by Gardiner, but find nothing except a student squat.

Desperate to arrest the dealer, and furious with Dashwood for lying about his snout, Galloway stakes out the dealer's Range Rover in a car park, despite Brownlow insisting he end the operation. When a borough councillor complains to Insp. Kite about the estate raid, it is discovered that the squat has a hidden basement. Galloway and his team race back there only to discover they have been beaten to it by the Drugs Squad from the Yard.

Meanwhile, Sgt. Cryer holds a public viewing at Sun Hill for recovered stolen property, but a gold snuff box is re-stolen before the owner arrives to claim it.

Retrieved from "https://thebill.fandom.com/wiki/Episode:Some_You_Win,_Some_You_Lose?oldid=32936"
Community content is available under CC-BY-SA unless otherwise noted.