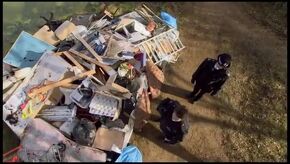 Written By
Gregory Evans
Produced By
Sylvie Boden
Directed By
Paul Wroblewski
Episode Chronology:
Previous
Intervention
Next
The Calling
Solace is the 2397th episode of The Bill.

However, once they arrive, it is too late. The man has hung himself (though he is later revived)

As PC Taylor searches upstairs for the little boy, he finds the boys body. He thinks the boy must be asleep as he is lying on his bed. But when PC Taylor rolls him over, his eyes are wide open and he is dead.

PC Taylor goes in to shock and after he tears himself away he sits himself on the stairs and won't answer Kirsty. When Kirsty tries to walk up to see Paolo (the young boy) Leon shouts at her and grabs her and tells her not to go up there. "DON'T GO UP THERE!" he shouts at her. Kirsty is initially shocked by his reaction but then responds with, "Paolo's dead, isn't he?"

After the exhausting day at work, Kirsty and Leon join fellow coleagues at the pub for the daily drink. Leon is stressed and turns around sharply, very on edge, when one of his best mate's (PC Ben Gayle) taps him. Kirsty convinces him to drink something stronger, so they do.

The two are laughing and having fun when Leon suddenly starts remembering the sequences of the day. Kirsty decides it is time to leave and they do.

They wait outside for a cab. Kirsty is holding Leon when the two find themselves kissing.

Retrieved from "https://thebill.fandom.com/wiki/Episode:Solace?oldid=34020"
Community content is available under CC-BY-SA unless otherwise noted.