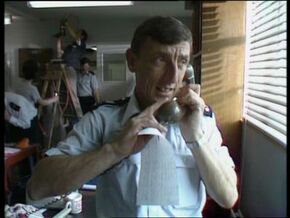 Snouts and Red Herrings is the 12th episode of The Bill. Clashing personalities mean fricting in Sun Hill Nick - to say nothing of the hassle on the streets.

Amidst renovation chaos at Sun Hill, a new P.C., Abe Lyttleton, arrives a day early. He is Sun Hill's first black police officer, and although he is friendly and popular, his arrival is not appreciated by bigoted cop P.C. Pete Muswell.

D.C. Dashwood recognises a man who has brought in his papers for a car (licence, M.O.T. form and insurance). He is using a false name and address.

During electrical repairs, the personal radios are out of action and as a result, a CID operation is blown.

Retrieved from "https://thebill.fandom.com/wiki/Episode:Snouts_and_Red_Herrings?oldid=19759"
Community content is available under CC-BY-SA unless otherwise noted.