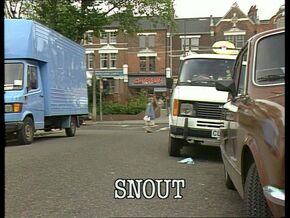 D.I. Burnside visits D.C. Carver's prisoner, and interrogates him alone, against regulations, leaving Carver outside wincing at his methods as he hears Burnside bellowing at the prisoner and linking his name with sex offences against children.

Retrieved from "https://thebill.fandom.com/wiki/Episode:Snout?oldid=34297"
Community content is available under CC-BY-SA unless otherwise noted.