Start a Wiki
Set In Stone 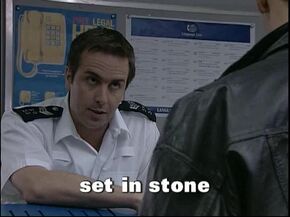 Set In Stone is the 1651st episode of The Bill

New PC Cathy Bradford makes an immediate impression after overpowering a thug who has escaped Sgt Craig Gilmore's clutches and made a run for it. Paired with PC Reg Hollis, she investigates vandalism at a graveyard, and has a falling out with PC Dave Quinnan over a suspect.

Retrieved from "https://thebill.fandom.com/wiki/Episode:Set_In_Stone?oldid=34238"
Community content is available under CC-BY-SA unless otherwise noted.