Start a Wiki
Seen To Be Done 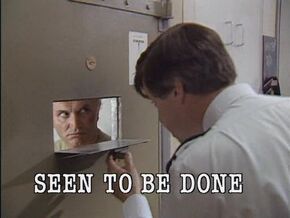 Written By
Jonathan Rich
Directed By
James Cellan Jones
Episode Chronology:
Previous
Pathways
Next
Tulip
Seen To Be Done is the 153rd episode of The Bill.

Sgt. Penny is kicking the drunks out of the cells. One of the drunks is very reluctant to go, and Sgt. Peters and P.C. Melvin overhear Penny lose his temper and exchange threats of violence before managing to get him out of the station. The man is later found dead by a cleaner in the front interview room. As Federation rep, P.C. Hollis is getting in the way of the investigation because he is concerned about the men who were on duty.

Retrieved from "https://thebill.fandom.com/wiki/Episode:Seen_To_Be_Done?oldid=34678"
Community content is available under CC-BY-SA unless otherwise noted.