Start a Wiki
Save The Last Dance For Me 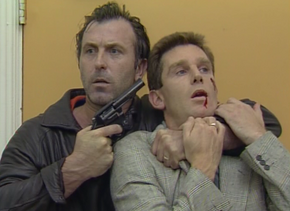 "Save the Last Dance for Me" is the 51st episode of The Bill.

A dangerous escaped prisoner is expected to visit his girlfriend in Sun Hill, and a massive surveillance operation is in place to catch him when he turns up. A bored relief waits in the canteen with PT17, and P.C. Ramsey suggests a little game of cards to pass the time. Sgt. Peters and D.C. Carver wait in a van, and while Peters is answering a "call of nature", Carver arrests a boy for damaging cars. The best view of the girlfriend's house turns out to be from a dance school, where D.C. Dashwood and W.P.C. Ackland are waiting, and end up having to take part in a class. The jealous husband of Dashwood's dance partner storms in and attacks them, taking Dashwood's gun, which fortunately is unloaded. Ch. Insp. Conway nearly blows the operation when his impatience causes him to break radio silence, despite D.S. Roach's warnings, but his radio call is just the diversion Dashwood needs to overpower his assailant.

Retrieved from "https://thebill.fandom.com/wiki/Episode:Save_The_Last_Dance_For_Me?oldid=33289"
Community content is available under CC-BY-SA unless otherwise noted.