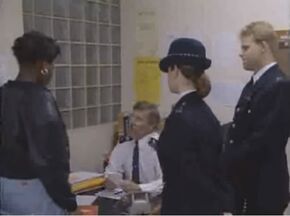 Written By
Edwin Pearce
Directed By
Bren Simson
Episode Chronology:
Previous
Powers of Exclusion
Next
By The Skin of Our Teeth
Saturday Night Fever is the 187th episode of The Bill.

D.C. Carver is at the hospital checking on a stabbing of a drug dealer. W.P.C. Martella has some information about the deceased which prompts D.I. Burnside to bring in a couple of suspects. Sgt. Peters is having a busy time in Custody. P.C. Garfield and W.P.C. Brind bring in a girl who has knocked her mother out. Brind has to search her, and is hit by the girl who later tries to hang herself in her cell. It turns out she had stabbed her boyfriend, who turns out to be Carver's victim.

Retrieved from "https://thebill.fandom.com/wiki/Episode:Saturday_Night_Fever?oldid=34805"
Community content is available under CC-BY-SA unless otherwise noted.