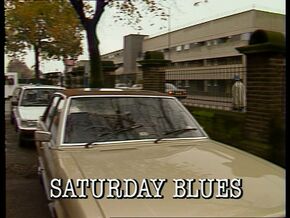 Saturday Blues is the 93rd episode of The Bill.

A young woman is taken to hospital in a coma after a drug overdose - she is D.I. Burnside's god-daughter, Tracey. Burnside orders Tracey's boyfriend, nightclub manager Terry Palmer, brought in for questioning. Drugs are found in Palmer's flat but he denies giving them to Tracey. D.S. Roach tries to convince Burnside that he's too emotionally involved in the case. Tracey dies and it looks like she committed suicide. Burnside charges Palmer with possession and intent to supply. A wedding party is brought into the station after the bride assaults the bridesmaid for having sex with her husband. In addition to the assault charge, it appears some of the wedding presents are stolen goods.

Retrieved from "https://thebill.fandom.com/wiki/Episode:Saturday_Blues?oldid=34536"
Community content is available under CC-BY-SA unless otherwise noted.