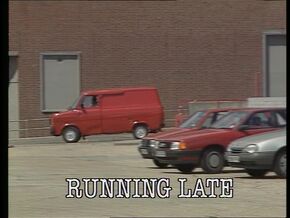 W.P.C. Brind is late for parade, and misses a warning to the uniform relief to stay away from the Dock Industrial Estate, where C.I.D. and a P.T.17 team are awaiting a security van robbery. While on foot patrol, Brind chases a young girl onto the estate and into the middle of the operation. Burnside stops a suspicious van, but it turns out to be full of fish. Brind is yelled at by Burnside and Sgt. Cryer, but she has her suspicions about the girl, Jane, and her family. Meanwhile, Burnside discovers that the security van visits the estate twice, and he races back with all the armed officers he can muster, just in time to catch the robbers. Brind returns to Jane's flat where she discovers a bedroom full of stolen goods. She arrests Jane's mother, who turns out to be one of Burnside's snouts.

Once again, Burnside goes over Sgt. Cryer's head to get one of his informants released. This happened in first episode, Funny Ol' Business – Cops & Robbers, when P.C. Carver's first arrest was of another of Burnside's informants.

Retrieved from "https://thebill.fandom.com/wiki/Episode:Running_Late?oldid=34263"
Community content is available under CC-BY-SA unless otherwise noted.