Rough In The Afternoon 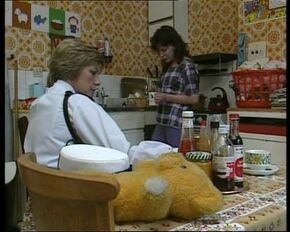 Rough In The Afternoon is the 8th episode of The Bill. Problems arise when a car is stolen from the police pound. The officers get involved in a 'domestic' when an estranged father abducts his son.

PC Carver and PC Edwards are called to a domestic and are informed by the neighbour that a child was taken by his father. Meanwhile, the mother has turned up at the station to report the abduction in person.

Retrieved from "https://thebill.fandom.com/wiki/Episode:Rough_In_The_Afternoon?oldid=19743"
Community content is available under CC-BY-SA unless otherwise noted.