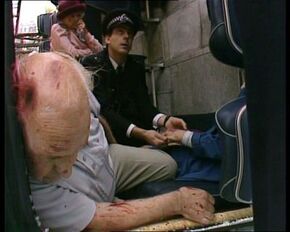 Ringer is the 18th episode of The Bill. Accidents can happen, but the boys from Sun Hill know that they are not always what they seem.

There is a serious road crash involving a Porsche, a motorcycle, a coach, a lorry and a Cortina resulting in six deaths. The Porsche had been tampered with prior to the accident and turns out to have been made of three different cars. Brownlow sets up a temporary morgue at a local school; W.P.C. Martella and P.C. Muswell have the job of informing relatives of the deaths. After following the trail from the Porsche, D.I. Galloway raids a scrapyard only to find D.S. Burnside from the robbery squad undercover as a buyer, about to break the ring, but having forgotten to tell Galloway.

Retrieved from "https://thebill.fandom.com/wiki/Episode:Ringer?oldid=31475"
Community content is available under CC-BY-SA unless otherwise noted.