Start a Wiki
Return of The Hunter 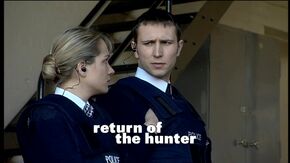 Return of the Hunter is the 1585th episode of The Bill.

Sgt. Cryer gives a talk about drugs at a local primary school. Cryer and PC Hayward are called back to the school where an angry divorcee, Chris Finnessey, is demanding to see his son. When the boy's teacher warns the police of Finnessey's violent reputation and a possible restraining order against him, he grabs a Stanley knife and takes the teacher and Cryer hostage in an art classroom.

SO19 is summoned, PC Smith amongst them, while Supt. Chandler takes charge at the scene. Against advice, Chandler agrees to let the boy into the classroom, with disastrous consequences.

In the end, when Mr. Finnessey leaves with the boy and Cryer, PC Dale 'Smithy' Smith gets an 100% visual and fires a shot. Unfortunately, at the same time, Cryer jumps at Finnessey to free the boy and takes the bullet to the sciatic nerve. Smithy's partner then shoots the attacker in the left lung. Later in hospital, we see Smithy confess to Cryer that he shot him, to which Cryer responds, "Friendly fire? ... It happens.", showing us that he holds no grudge.

Retrieved from "https://thebill.fandom.com/wiki/Episode:Return_of_The_Hunter?oldid=35583"
Community content is available under CC-BY-SA unless otherwise noted.