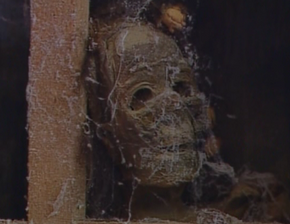 The decayed skeleton found behind a wall

P.C. Ramsey and P.C. Haynes attend a flat where the occupants have discovered a decayed skeleton in the wall where they were going to build a fireplace. Sgt. Cryer, D.S. Roach and D.C. Dashwood are called in, and a forensic expert soon arrives to examine the body. What looks like a baby's body is also found, but it turns out to be a doll. While CID search for former occupants and interview the Trants' obnoxious neighbours, a note is found in the wall from a merchant sailor who couldn't afford a funeral, so he put his dead wife's body in the wall.

Retrieved from "https://thebill.fandom.com/wiki/Episode:Requiem?oldid=22497"
Community content is available under CC-BY-SA unless otherwise noted.