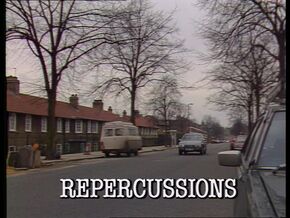 Written By
Tony Grounds
Directed By
Brian Farnham
Episode Chronology:
Previous
Cock-Up
Next
A Death In The Family

Repercussions is the 98th episode of The Bill

Chief Supt. Brownlow arrives at Sun Hill through a crowd of journalists anxious to hear his reaction to the CID drug bust operation that went drastically wrong. Chief Insp. Conway yells at D.I. Burnside before going to see Sgt. Cryer, who gives his own take on the operation. P.C. Smith is accused of making racist remarks while arresting one of the schoolgirls, but P.C. Ramsey is the real culprit. The headmaster of the school comes to talk to Mr. Brownlow.

Retrieved from "https://thebill.fandom.com/wiki/Episode:Repercussions?oldid=34546"
Community content is available under CC-BY-SA unless otherwise noted.