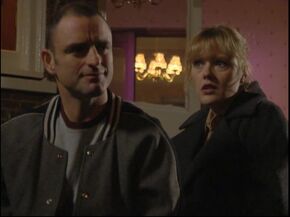 Quinnan and Page are not speaking after Page's revelations regarding Liz. Adding to Quinnan's misery is the receipt of his divorce papers and Stamp's implication that whilst his ex wife's life has moved on, Quinnan's hasn't. An operation to smash an illegal immigrants ring offers Quinnan the chance to redeem himself in the eyes of his colleagues. Whilst DS Debbie McAllister is dealing with a body that's been washed up from the river, Sgt Matthew Boyden is at the scene of a road accident. A lorry has come off the road and shed a couple of chest freezers. The holes in the freezers and an Iraqi paper inside the lorry leads Boyden to conclude that it was carrying illegal immigrants. Quinnan then spots four bedraggled men walking along the roadside; giving chase, he manages to catch Petrit, who unsuccessfully tries to pass himself off as a Geordie. At Sun Hill Petrit informs Sgt Craig Gilmore and Ch Insp Derek Conway that he is working with Immigration for an Officer called Nicholson who later confirms this. He explains that Petrit is helping them to track a suspected Mafiosi slave trader Berisha. At the mortuary Petrit identifies the washed up body as Hassan, an Albanian refugee. He also notices marks on the body which indicate that Hassan was murdered. An undercover plan is hatched involving two officers running an hotel as a couple. It is hoped that they will be offered illegal immigrants as employees which will lead to the source of the ring. When Quinnan is chosen to play the husband he is dismayed to learn that McAllister will be his wife. He is determined to get Page on board. [Source: www.thebill.com]

This was originally broadcast (along with the Quinnan, Part 1) as a two-hour episode.

Retrieved from "https://thebill.fandom.com/wiki/Episode:Quinnan,_Part_2?oldid=34243"
Community content is available under CC-BY-SA unless otherwise noted.