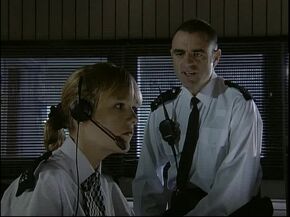 At her local gym PC Cathy Bradford (Connie Hyde) is concerned that Marti Hunt (Jemma Hines) is being worked too hard by her father Barry Hunt (Michael Attwell) who is also the owner. As she leaves, Bradford agrees to keep an eye out for a petty thief who has been targeting the gym.

Back at the station PC Dave Quinnan (Andrew Paul) mentions to PC Tony Stamp (Graham Cole) that he is thinking of asking out Liz Terry from the Day Centre. Stamp is sceptical and encourages a wary Polly Page (Lisa Geoghan) to check Liz's history on the police computer. Page is left with a dilemma when the results reveal that Liz used to be a prostitute.

Meanwhile a reluctant PC Jim Carver (Mark Wingett) has joined Bradford's gym. He is immediately suspicious that bodybuilder Jay Cutler (Andrew Pleavin) could be the thief especially when he later sees Cutler selling steroids in the changing room. However, closer inspection of another gym member Andy Little (Mark Folan Deasy) leads to the case taking an unexpected twist.

Retrieved from "https://thebill.fandom.com/wiki/Episode:Quinnan,_Part_1?oldid=34240"
Community content is available under CC-BY-SA unless otherwise noted.