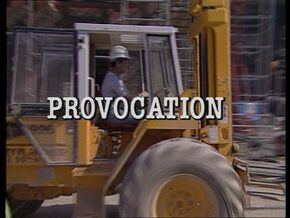 Provocation is the 135th episode of The Bill.

D.C. Dashwood has been investigating thefts from a building site. D.S. Roach gets him to interview a lad about a stolen moped. The boy's father hits Dashwood and then follows him as he goes to meet the building site foreman. The foreman is uncooperative and tells Dashwood not to come onto the site again after handing over a list of names. W.P.C. Ackland is talking to P.C. Melvin about taking her sergeant's exams. She tells two boys off for riding bicycles on the pavement. Ackland and Melvin respond to a call and find Dashwood in a lorry park. He has been beaten unconscious and the list of names is missing.

Retrieved from "https://thebill.fandom.com/wiki/Episode:Provocation?oldid=34645"
Community content is available under CC-BY-SA unless otherwise noted.