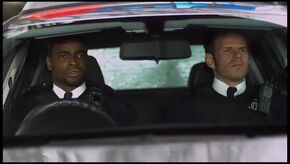 PCs Roberts and Gayle are shot at while on patrol. Insp Smith and Sgt Masters co-ordinate operations on the ground. A car seen driving away from the scene leads officers to a suspect. Commander Kennedy, overseeing an inquiry into the incident, is unhappy at Smith's decisions. Meanwhile morale is low amongst the team after Sgt Stone's suspension.

Retrieved from "https://thebill.fandom.com/wiki/Episode:Protect_%26_Serve?oldid=33989"
Community content is available under CC-BY-SA unless otherwise noted.