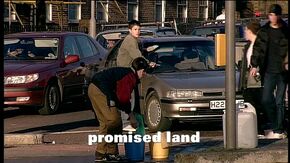 Promised Land is the 1584th episode of The Bill.

PC Klein becomes involved when Kosovan refugees housed at a council estate are being harassed and attacked. Later, at a family gathering, Klein's cousin Jerry arrives and is praised by the family for his success. DC Webb investigates a robbery at a clothing factory, and his investigations lead him to Norman Klein, his colleague's uncle. The link between the latest robbery and a previous one is revealed to be Jerry Klein who assessed security at both places. When Jerry is found badly beaten, Klein decides he must tell the police about his cousin's possible involvement, which results in DI Cullen catching the gang on their third job.

Retrieved from "https://thebill.fandom.com/wiki/Episode:Promised_Land?oldid=36151"
Community content is available under CC-BY-SA unless otherwise noted.