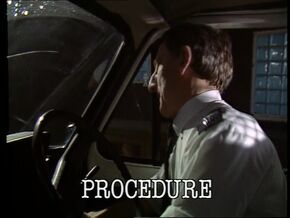 Procedure is the 109th episode of The Bill.

Cryer is filling up a car. Peters gives the relief a lecture about refilling area cars after using them. The fraud squad are visiting the station a day early. CID has Customs and Excise visiting. Peters and Haynes are told of a man who had a heart attack. The ambulance leaves before his belongings can be handed in which results in a complaint being laid. Burnside interviews a boy racer that Viv has arrested.

Retrieved from "https://thebill.fandom.com/wiki/Episode:Procedure?oldid=34593"
Community content is available under CC-BY-SA unless otherwise noted.