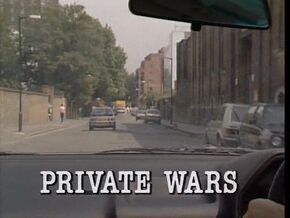 Written By
Guy Meredith
Directed By
Nicholas Prosser
Episode Chronology:
Previous
Visitors
Next
Feasting With Panthers
Private Wars is the 173rd episode of The Bill.

D.I. Burnside is driving past an electricity substation when he sees someone climbing over the wall. While investigating he is beaten up by security guards. Insp. Frazer is looking for blue movies that have gone missing from the property office. Ch. Supt. Brownlow is upset by an article P.C. Hollis has written for the Federation magazine.

Retrieved from "https://thebill.fandom.com/wiki/Episode:Private_Wars?oldid=34722"
Community content is available under CC-BY-SA unless otherwise noted.