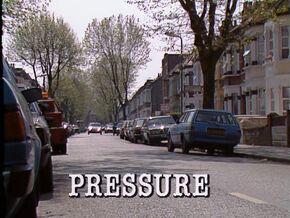 Written By
Kevin Clarke
Directed By
Barry Davis
Episode Chronology:
Previous
Street Games and Board Games
Next
A Little Knowledge
Pressure is the 150th episode of The Bill.

P.C. Edwards and P.C. Stamp are on a shout when they come across an accident. They have to carry on, leaving P.C. Haynes to deal with it. A nasty atmosphere is developing at the scene of the accident.

Edwards' wife thinks Sgt. Cryer is stopping his transfer going through—except he hasn't actually applied for one. Insp. Frazer talks to Haynes about being sergeant material.

Haynes talks to one of the accident witnesses about how he feels about being black on the job. He is stopped and searched by two coppers from another station.

Retrieved from "https://thebill.fandom.com/wiki/Episode:Pressure?oldid=34672"
Community content is available under CC-BY-SA unless otherwise noted.