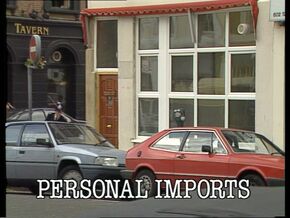 P.C. Melvin sees a chemist being robbed, but he has powder thrown in his face and the thieves escape. D.C. Carver is conducting an obbo in the house of a lonely, amorous woman. He spots what looks like a drug exchange and pursues the car, but is told to relinquish the pursuit to the drugs squad from the Yard. W.P.C. Martella investigates a truancy case, where 14-year-old Turkish boy Omir is being looked after by his cousin "Auntie". D.S. Roach is pushed over in a public toilet by a man picked up by another bloke. He gets a tip-off from his transvestite snout, Roxanne, about a local barmaid running rent-boys in the area. Martella recognises the address as that of her missing Turkish boy, and she and Roach raid the flat and arrest Auntie.

Paul O'Grady guest stars as Roxanne in this episode.

Sarah Woodward guest stars as Fiona in this episode.

Retrieved from "https://thebill.fandom.com/wiki/Episode:Personal_Imports?oldid=34287"
Community content is available under CC-BY-SA unless otherwise noted.