Start a Wiki
Pay Back 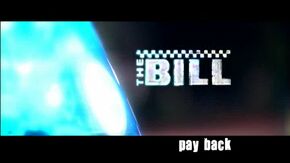 Written By
Patrick Homes
Directed By
AJ Quinn
Episode Chronology:
Previous
Driven To Kill
Next
Cover Up
Pay Back is the 2232 episode of The Bill

PCs Armstrong and Gayle stop a 12-year-old boy driving a stolen car, and investigate claims that the boy's father is being threatened by a known violent offender. DCs Moss and Perkins investigate the provenance of an explicit DVD featuring a local celebrity.

Retrieved from "https://thebill.fandom.com/wiki/Episode:Pay_Back?oldid=34902"
Community content is available under CC-BY-SA unless otherwise noted.