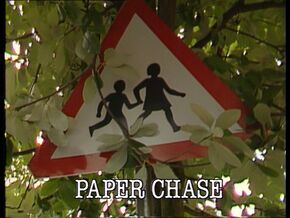 A schoolgirl has been abducted, and D.I. Burnside is determined to find her. The girl's father is reluctant to have the police involved, as the kidnappers have threatened to kill his daughter if the police are called. He gets £250,000 out of his company account to pay the ransom. A technical officer from the Yard is called in to bug the briefcase. C.I.D. wait and watch with binoculars, and after a decoy run, the father makes the drop. Immediately Burnside and his team raid the premises, but there is no one there and the briefcase is empty. The little girl turns up at home safe. Burnside smells a rat, and the technical officer finds the bugged briefcase and money in the father's car.

Christine Kavanagh guest stars as Celia Hortman in this episode.

Retrieved from "https://thebill.fandom.com/wiki/Episode:Paper_Chase?oldid=34289"
Community content is available under CC-BY-SA unless otherwise noted.