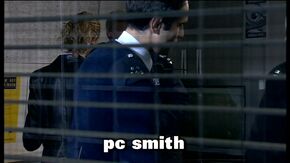 Hoping it will convince Supt. Chandler to endorse his transfer to SO19, P.C. Smith volunteers with P.C. Klein to 'babysit' Clive Allein, the victim of a gay bashing who is reluctantly testifying against his assailant, Gary Cook, in court the next day. While Smith gets on well with Allein, a former army officer, he nearly blows it when his angry reaction to Allein's partner Ian Jones's teasing causes Jones to run off, where he is promptly attacked. Allein refuses to testify until Smith convinces him otherwise. The trial goes ahead, and Cook is found guilty, but further threats from Cook's friend Paul Taylor cause Ian to storm off again, and this time he goes missing. Smith and Klein fear the worst when a stabbing victim is reported, but it turns out to be Paul Taylor who is the victim, and Ian Jones the attacker.

Retrieved from "https://thebill.fandom.com/wiki/Episode:PC_Smith?oldid=36179"
Community content is available under CC-BY-SA unless otherwise noted.