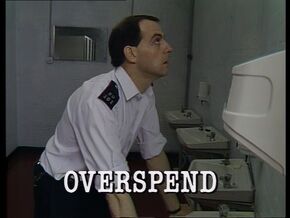 Written By
Christopher Russell
Directed By
Terry Marcel
Episode Chronology:
Previous
Provocation
Next
Between Friends
Overspend is the 136th episode of The Bill.

P.C. Edwards has come in for a shift before taking his holidays. He is worried he will miss his flight. He tries to saw a bed rail to remove a prisoner but ends up removing the bed head instead.

Ch. Supt. Brownlow is trying to cut spending and tells D.I. Burnside that for the present CID will have to use the buses. D.C. Carver misses his on the way to a supermarket to see about staff pilfering. He wrenches his ankle getting off the bus chasing a butcher, who is smuggling meat out of the supermarket in his clothes.

Sgt. Penny is going by the PACE book, much to Burnside's annoyance.

Retrieved from "https://thebill.fandom.com/wiki/Episode:Overspend?oldid=34647"
Community content is available under CC-BY-SA unless otherwise noted.