Start a Wiki
Over The Hill 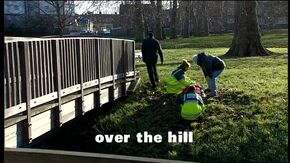 Written By
Henrietta Hardy
Directed By
Michael Owen Morris
Episode Chronology:
Previous
Lies of Silence
Next
Head Over Heels
Over The Hill is the 1591st episode of The Bill.

It's Sgt Boyden's 40th birthday, and to make matters worse, he has to cancel a date to attend an outward pursuit weekend with PC Hagen and a group of wayward teenagers. CID investigate the serious bashing of an elderly man, and their prime suspect is Jason Wyatt who had attacked the same man some months previously. Jason is one of the group with Boyden and Hagen, and his aggressive personality causes several arguments and fights over the weekend. Boyden forms a bond with the boy though, and suspects Jason's abusive father had more to do with the attack. Forensics prove him right, but to Boyden's dismay, Jason faces a manslaughter charge as the injuries he inflicted on the man months ago caused the man to die. Hagen promises Boyden a birthday drink, but the relief have organised a surprise party, so they take a raincheck.

Retrieved from "https://thebill.fandom.com/wiki/Episode:Over_The_Hill?oldid=35616"
Community content is available under CC-BY-SA unless otherwise noted.